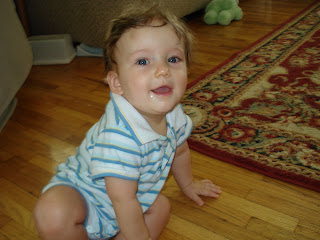 Where in the world did the last 8 months go? It hardly seems possible that it's been 8 months since Isaiah was born. He's growing like a weed, crawling all over at high speeds, pulling himself up to standing on everything he can, and eating some food he has to chew (although he still doesn't show any signs of teeth). Of course the pulling up on things leads to falls and bruises. Breastfeeding is going well still. I've been a little surprised at some of the reactions people have when they find out I'm still breastfeeding. Especially from co-workers. I kind of expect to hear "You're still nursing him?" "Since he's eating food, you're probably weaning him, right?" "You'll wean him by the time he's a year old won't you" from family, although after 3 breastfeeding kids, I'm surprised they haven't realized how big of an advocate for breastfeeding I am. What surprises me is the reaction from my co-workers. Most everyone seems surprised I'm still breastfeeding. He has to have bmilk or formula until he's a year, so why would I stop? Just so I can give him formula? They are also surprised he's never been supplemented with formula, especially the first 6 months. I guess I figure that my co-workers are educated on the benefits of breastfeeding, especially exclusive breastfeeding that they would be more understanding. Not everyone can breastfeed, but it came easy for me. Anyway, I got up on my soapbox, maybe I'll delve into this more in another post. Isaiah's hair is still wild, but not wild like it was a few months ago. Most of it will lie flat, but he's got this cowlick that makes his hair stick up in the back, plus his bald spot is still growing in so it gives the illusion that he's wearing a hair piece. It's a riot. I'm sure he'll be walking before I'm ready. Really, there's no way to completely baby proof, so we're constantly pulling him away from the entertainment center, from the dvd's, taking the older kids toys away, and it goes on. Only in the playpen is he contained and can't get into anything. That is until he's big enough to pull himself out of it! But I think we have a few more months before that happens, hopefully!


A picture doesn't do it justice, but you can kind of see how it looks like a hairpiece 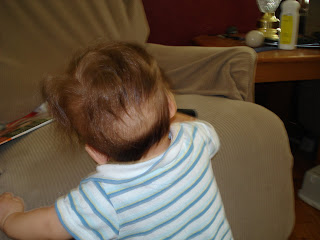 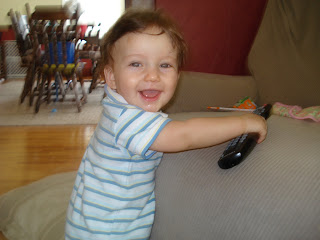 Super cute! and congrats on breastfeeding so long! I'm jealous! I got mastitis with my last one and cried (from pain) every time I breastfed till I quit.

Your son is adorable, 8 months is such a fun time too!

As for the breastfeeding stuff and the clinic, I'm not surprised, but I do think it's awesome that you work there and bring the wisdom that you have there. Hopefully you're part of a growing trend.

I didn't BF with my first and I won't with my second (due in January) due to my own insecurities and the prescription drugs I must take the second the baby is born. However, when I see a woman out and about some where with a child, no matter what the age, and they're BFing, I smile at them because it takes a hell of a lot of work to do it and you know they're doing it for the right reasons. I don't see why everyone cares so much how long you BF or when you wean. It's not their kid and it's GOOD for him. And yes, I thought too those that work in L&D around babies would be a little more supportive of those mothers who choose to BF, no matter how long they choose to do it. So kudos to you. ;)

It is completely surprising to me that some of my biggest critics of breast feeding for over 2years were my coworkers all OB nurses also. Your little guy is very cute, and what is it about baby's hair my little girl had her daddy's hair line until she was 2, bald on top. Kim