This past couple weeks of work, we've had quite of few people having babies with not so good things going on or that have happened in their life. Moms who have been raised by another family member after her mother was murdered, moms living with people who throw beer on them and all over their baby clothes, husbands who committed suicide and killed one of the children, abuse, drug abuse, etc. One mom I'll probably never forget her because of the horrible, horrible situation she's in. I obviously can't give the details, but it just breaks your heart when you try to help someone who doesn't want help. I'll be the first to admit that I grew up under a rock a small town, surrounded by corn and other small towns, but damn, there are some sick people out there. Anyway, moving on...

In one week, Jacob is going to kindergarten. I just can't believe it. I know I've said it before and it's kinda cliche', but I just don't know where the time has gone. And it's hard to explain exactly why I'm going to be a little sad come next Monday watching him get on that bus. It's a big milestone, I think it will help end some of the bickering between him and Clara because they won't be together all the time, and I'll be able to get stuff done. I think it's because it's the end of his "babyhood" even though he hasn't been a baby for a long time now. You don't notice that the days and hours go as quickly as they do until you look and your sweet baby is now crawling, then walking and running, talking in sentences, writing his name, getting on the bus to kindergarten, getting a driver's license and heading out the door to college. Don't get me wrong, I'm happy Jacob is going to school, and at the end of next summer, I'll be ready for him to go back I'm sure. And the thought of having all 3 in school and having 5 days all to myself sounds fabulous at times, but then again, what will I do? I think Jacob is going to have a ball in kindergarten. We were hoping he'd get our neighbor as his teacher and he did. She has a daughter just a couple weeks younger than Isaiah and Jacob was entertaining her one night while we were over at another neighbors house. So he'll know her. We have basically an orientation next Thursday where they'll clue us first-timers in on everything. It's a good thing, I just have to keep reminding myself I'll get through that first day.

Me and Jacob, December 42003, Jacob was 5 months. And man, I look a lot younger, well, I guess I was younger... and thinner...and less sleep deprived! 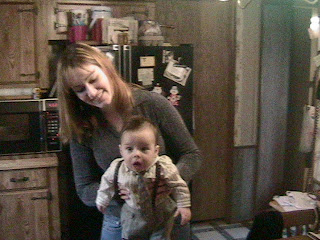 Me and Jacob, he loved his paci, a little too much as he got older. He loved being rocked to sleep and he liked having his paci and being held really close, like he was nursing, to fall asleep. 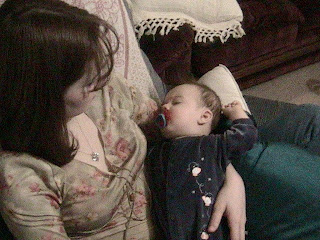 Naked baby Jacob on our bed, playing under the towel. I remember this night, he was being so cute. Luckily, he didn't pee on the bed! 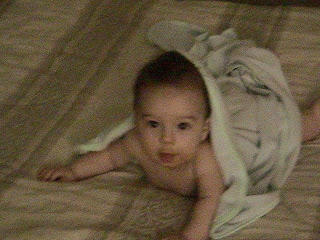 Notice the wild hair? Seems to be a thing in our family with the boys. 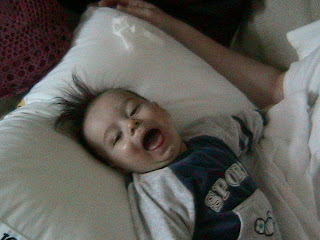 Jacob now, at a big 5 years old. Don't worry, he's since had a hair cut :) I just can't believe how much he's changed! 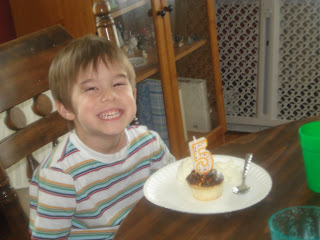 look at him! So cute