It's been a busy weekend. Friday, husband and I went to the local comedy club and saw the Midnight Swinger. It was a lot of fun. The guy was hilarious, and he gave us a glimpse as to what Isaiah's hair may look like. To see what I mean, check out his site themidnightswinger. com and check out this dudes hair. I've posted a pic of Isaiah's do at the bottom. Anyway, it was good for us to get out away from the kids and the household duties for a couple hours.
At work, we had been waiting for a co-worker, who's due date was 3-23, to deliver. She works weekend option on day shift, and we were surprised to see her still working on Saturday. She's one of those thin women who feel great the whole time and you can't tell she's even pregnant from behind. Saturday, she looked like she was waddling, which she never did before, and she said she'd been having irregular contractions. She went home at 7:30 after working 12 hours, and her water broke an hour later. She came in for me and she delivered within 4 hours! Not bad for her first baby. I love watching someone go from being pregnant to the mother role. You don't always see it, but it's pretty awesome to see the transformation. It's hard to explain, but if you've ever been with someone through labor delivery and those first few hours after the birth, you know what I mean. Right afterwards, they are just in shock that they have a baby, but usually after they've been moved to post-partum and are settled, you start to see something change as they take on their new role. Not always, but sometimes. It's pretty awesome to see .
I found out last night that the incident reports we fill out, like the one I filled out on the doc who was really rude to his patient last weekend, are basically worthless. I kinda figured as much, but I talked to a former nightshift charge nurse, who now is in the role were she gets such reports, and she said nothing is ever done. The reports are put into their file, and aren't seen until their contract with the hospital is up. Makes me wonder why the hell we even bother to fill out the damn things if it's just a waste of time. Ugh.

I also had a patient last night that raised my stress level to an all time high, but not on purpose. She had come in with a headache, 30 weeks pregnant, and after checking her BP at a store found it to be 150/100. Too high, so she came in. Well, the BP resolved, her labs were fine, reflexes were fine, but her baby started having what looked like late decels, but she wasn't having any contractions at that time. So I gave her oxygen, moved her around and it was all good for awhile. I called the doc, faxed her the strip and she said to just watch because she didn't want to deliver a 30 week baby if it wasn't warranted. She did start having very, very mild contractions and had late decels after each. And of course all the usual stuff didn't help for very long. After about 20 minutes of a decent strip, I start seeing lates again. Finally, the doc came in and ordered a sono and a biophysical profile to see what was going on, and this patient will be transfered to a high risk hospital with a NICU, or delivered and the baby shipped. It was just one of those strips that you look and and it makes you want to pull your hair out. I hope everything works out for her.

And lastly, when I went to daycare to feed Isaiah before going home, I found that they had warmed up a bottle for him, even though husband had told them I'd be in shortly to feed him. He wasn't fussing when I got there, so I'm not sure why they were warming his bottle. So I tried to feed him and he ate well on the right, but screamed and refused the left. And he did that once yesterday. Not sure what that's all about, but its a bit frustrating. Anyway, enough rambling for one day. I'm going to bed. 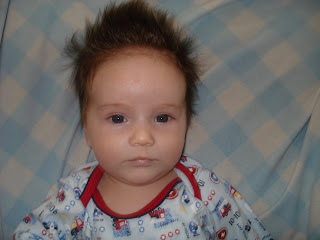 Hello. This post is likeable, and your blog is very interesting, congratulations :-). I will add in my blogroll =). If possible gives a last there on my blog, it is about the Smartphone, I hope you enjoy. The address is http://smartphone-brasil.blogspot.com. A hug.