Today, Clara officially turned 3! We're not doing much today, but we are having family down this Saturday for cak and ice cream. I sure wish I could slow down the clock because it seems like it keeps going fast and faster. It still feels like yesterday that I was wheeled into the nursery to see her for the first time under the oxihood, waiting to hear what the cardiologist had to say about her echo and EKG, holding her for the first time when she was ten hours old and crying because if her legs werent even with her heart, they would swell up within a few minutes. You'd never believe that she's the same little girl looking at her now! 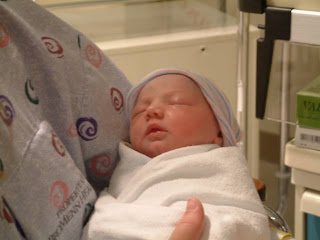 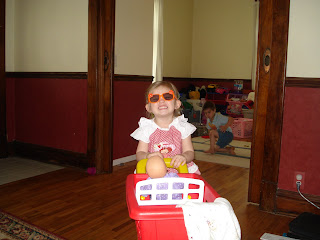 It's amazing how in OB, and probably every unit in the hospital, how you can go from an absolute madhouse to dead quiet. This weekend was sooooo slow. Saturday not as bad as Sunday. Sunday we had 3 mom/baby dyads, and one outpatient back in labor. We spent 12 hours cleaning, organizing, etc. It was stuff we needed to get done, and it worked out because it was rumored that JCAHO was in the area, but it sucked. It was the longest 12 hour shift I've worked in awhile.
One patient we had over the weekend was interesting. She and her husband are civil war re-enactors and had had their first baby almost exactly a year ago. They always were in clothes reminiscent of that era. She was quiet and he was large and very intimidating. You could tell by the way he talked to her that the relationship was probably abusive. I remember with her first baby, after we had her back in the c-section room, her physician asked her before we brought her husband back if she felt safe. She said she did, and they stayed with us last time for quite awhile because their first baby was only 34 weeks. The dad was just creepy. We had to change the code to the nursery door because he had figured it out and actually opened the door. He would decide when she had pain meds (which wasn't often) and would only let her take motrin. I just wanted to say "Let's cut your abdomen open, and see how you tolerate the pain on top of breastfeeding". Now less than a year later, they were back. It didn't seem quite as bad, but you could tell by the way he talked to her that he had no respect for her. She did take more for pain this time, but partly because we said that it was prescribed by her MD. It just killed us to watch them because we know he's probably abusive, but there's nothing we could do since she said she felt safe. Maybe we are wrong. She'll probably be pregnant again very soon because I'm sure when he has his 'need', he'll pay no attention to whether they have been cleared by the MD or not.
Now that I've started playing with adding pictures to my posts, I think I really will get some belly shots up. As soon as I find all the stuff I need to download the images onto the computer!
Posted by Nurse Lochia at 2:01 PM