Tomorrow, my baby will be 1 year old. One Year. Wow, time has really flown by. I know it's cliche' but I look at him and wonder how this past year went by so quickly. Just like when I was pregnant with him, I wanted time to go a bit slower, knowing he is the last. But, just like the pregnancy, it still flew by. And I'm a little sad. I miss the days when he was a newborn and would curl up on my chest. I miss swaddling him. I'll miss the nursing sessions, although I'd be happy to forgo the middle of the night feedings. Nope, still doesn't sleep through the night. Ever. It's very frustrating and I realize it's partly our fault. I fell asleep in bed nursing him as a newborn. I sit and hold him until I'm ready for bed because someday, he won't let me hold him. We could let him cry it out, and make him sleep in the crib. I could stop nursing him at night to get him back to sleep, but I'm so tired, it's easier to give in. Bad, yes, but someday, I'll wake up in bed without the baby and realize that Isaiah is no longer a baby and long for those days. But right now sleeping kinda sucks. Even with that, I do think that both Husband and I enjoyed him more during his first year than we did with the other two. Not because we loved them less, but because we were more experienced parents, weren't as nervous and we knew that this stage only happens once and doesn't last. Sure, we had a hell of a lot more fights/arguments this past year than ever and there were times I worried about our marriage. But, rest assured, we're just fine, if not better than we were before Isaiah was born. And man, how he's changed! He's a walking maniac and today he tried to run. He's into everything, dances to music, and still likes to give High-fives. Since he's started walking a couple weeks ago, he's not a cuddly as he was before, but at night he still likes his mama time. Yep, still breastfeeding. He only nurses before naps and bed now. Right now, I have no plans to wean him. I always said I'd try for 2 years, but with Clara I weaned her at 19 months. It was too much for me when she started asking for it. But with Isaiah, I'm trying to hold on to all those baby moments so we'll see how long we go. Out of all 3 of the kids, he's the best eater. He doesn't have any interest in those toddler meals if there is real food around. He's eaten everything from mashed potatoes to prime rib. He'll also be the first to actually make a mess with his cake tomorrow. Jacob was sick with hand-foot-and-mouth on his first, and Clara was just too dainty at the time, although now you'd never guess that. We're not doing anything big, just having family down. I've been adamant that even though his birthday is only 5 days before Christmas, he'll still always have his own day. The in-laws wanted to do to Christmas tomorrow to save them a trip, but it's not going to happen. They're down for the weekend so we'll do it Sunday morning. Yeah, yeah, I know he's only 1 year, but if his birthday was in April, he'd have his own day. It's not his fault he was born in December, or fair. Man, I look at him and just can't believe that one year ago, I was getting ready for bed, trying to sleep before I went in to have him. Even with all the trials and tribulations, it's been a good year. As I type, he's bouncing up and down by the baby gate, squealing with delight as I make faces at him. Such a cute little booger.

One year ago today: 38.3 weeks pregnant, the farthest I ever carried, even with Preterm labor 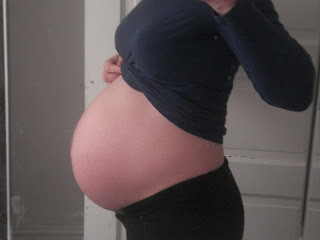 The cute little booger today, with his toys 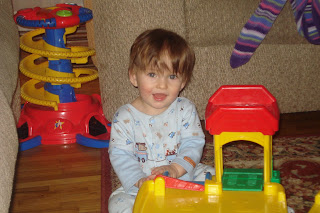 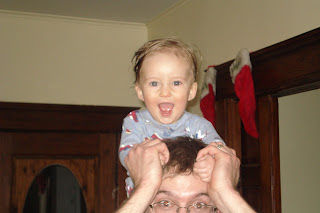 Showing off his walking skills 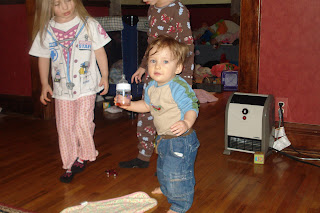 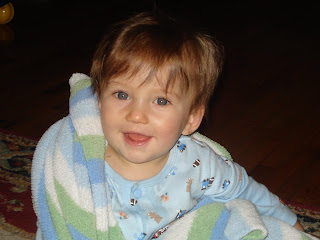 Being as I was born two days after Christmas, I can tell you that he will thank you one day for making his day just as special as your other kids birthdays. It's not a great time of year to have a birthday. Everyone is busy with the holidays and your day just seems to fall through the cracks and is only done as an after thought. I'm nine months pregnant with my second right now and can't help but feel guilty that he'll have a birthday so close to Christmas. ;) Happy Birthday buddy.

Haooy Birthday to Him!