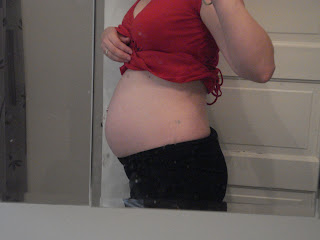 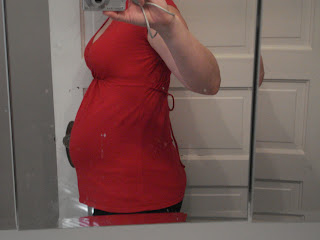 After looking back at the belly pics I took 6 weeks ago, I am really regretting that I didn't do this with my other two kids. I've put on a lot more weight this time than I did with Clara, but less so far than with Jacob. I think I figured out why. With Jacob, he was my first and I ate what I wanted, when I wanted. So I gained almost 50 pounds. Clara came so soon after Jacob that really I was still adjusting to being a mom, and I didn't snack much at all. This time, I'm cooking more for the kids and instead of eating the fruit and veggies I give them, I eat just the chicken nuggets, mac & cheese, etc. I did start our 6 lbs heavier this time, but I'm only 2 lbs away from the weight I was when I delivered Clara. Oh well, you're supposed to gain weight while pregnant.
Today I took the kids to a small pond that has a mile track around it to look at the geese. After we were leaving, some guy looked at me with my kids and pregnant stomach and said "Man, you're having them close, you're going to have it tough!" Usually I have a retort, but he caught me off guard so I just looked at him. Why is it people say stupid crap like that? Do people really think they are being helpful? I got that ALL the time when I was pregnant with Clara when people found out there would only be 15 months between them if I delivered at 40 weeks. I dont think people always realize that perhaps this is how my husband and I want it. We wanted all three of our kids close, and expecially since the first two are so close in age, we didn't want the third to be so far behind in age and get left out, although that will probably happen anyway. So far though, no stranger has reached out and touched my stomach. That's another one of those annoying things people do. I don't mind so much if it's someone I know. It's the perfect strangers who feel that a large abdomen is an invitation to touch. I reach out and rub their stomach every time it happened to me. I actually saw a shirt somewhere on-line that said "Don't touch, I kick". But I don't think I'd get the same reaction as reaching out and rubbing their stomach.