It's only been 2 weeks since Isaiah was born, but it feels like I was pregnant, blinked and he's 2 weeks old. He's still a pretty even tempered baby. We keep waiting for the crying all night, marathon nursing sessions and general fussiness like we had when Jacob and Clara were newborns, but he's still pretty easy to please. Nursing is going very well and I know how much of a blessing that is. So many people have problems nursing for many different reasons. His 2 week check-up was today and at two weeks, they just expect the babies to be back to their birth weight. Well, this little guy was 7lb 15 oz at birth...and he's now 8lb 11 oz! I'm pretty sure I've got a good milk supply!
A couple nights ago, my two elder munchkins were playing in their toy room and I was on the phone when I heard a blood curdling scream from Clara. I figured Jacob hit her. I check to see what's wrong and she shows me here tongue and there's blood in her mouth and a gash on her tongue. Apparently they were playing on this long chair we have in the toy room, Jacob somehow jumped on her head and she bit her tongue. Of course I didn't see it so I'm not sure exactly how it happened. Luckily, she's just fine and it doesn't seem to bother her now.
I'm slowly starting to feel like my old self again. My whole lower abdomen is still pretty tender from my belly button down, especially on the right side. I also think I may be working on a uterine infection (based on symptoms I've been having that I won't get into because it's pretty gross). I called the office and talked to the nurse about what was going on, which is significantly different than the last two times, and she pretty much blew me off. I hope she's right, but sometimes you know when something is off, and, not that I know everything, but I am an OB nurse whose had 3 children. I have an appointment next week so we'll see. Here are a couple of pictures. (Don't worry, the picture of Isaiah sleeping on his stomach was staged. I had been holding him and set him down for a picture. He always sleeps on his back.) 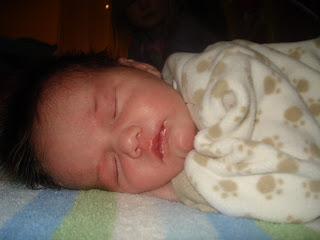 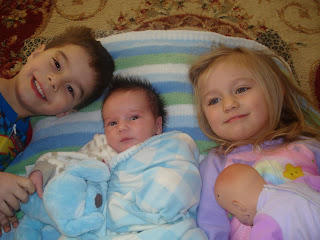 I am also from Illinois, and a lot of things you describe in your blog sound a lot like the hospital L&D unit I shadowed at. The hospital is Lutheran General Hospital, by the way. Thanks for the nice comment about my blog! I really enjoy yours, as well. It is always so much fun to read the blog of a L&D nurse, because you really get a 1st person account of what happened. I cannot wait until I start med school...but first I have to graduate junior high!