I knew I would end up feeling this way

Now before I begin this post I just want to say this: I know I did this to myself. I was given a choice and I chose this. I had all the facts and still caved when given the choice. And I knew I'd end up feeling like this.

Okay, I'm regretting I had a c-section this time. I know, I know, I was given the choice. I don't regret meeting Isaiah that day, or that I had him home for Christmas and all of that. But I wish I hadn't caved in when they said "he's head down. We can go ahead with the c-section, or you can go home and wait for labor". That's what I should have done and had planned on doing. But I'm like a lot of pregnant women: given the opportunity to end the pregnancy and meet the baby is hard as hell to reisist. Especially since he'd been breech for a while and everyone was expecting him Dec. 20. I had been wanting to VBAC until he had been breech for so long, then I got used to the idea of a repeat c-section. I'm not mourning the loss of a vaginal birth. I'm just having a hell of a time recovering. I know you forget some things from one birth to the next, but I'm positive I didn't feel like this after Clara was born. I had started working out and wearing jeans at this point. That won't be happening this time. This time has been significantly more painful than the last, all around. From the beginning with intense itching, to the gas pain, uterine infection, incisional pain etc. And now, almost 6 weeks post-cs, I'm still pretty sore. This weekend, I started having incisional pain that felt like it did at 1 week post-cs. It hurts just to turn over in bed and get up from a chair (that hadn't been happening lately) The cramping had ceased, but now has returned the last few days. And I have several sore, hard areas under my incision and this morning the painful area around the incision has gotten bigger. It hadn't been too bad, just about an 1 inch above the incision was sore. Now it's about 3 inches above the incision that is sore and the area directly above it is very sore. I don't think that anything is wrong. I just think I'm more uncomfortable because I've had 3 babies, all the pulling on the skin/muscle to get the baby out traumatized the tissue and because I had scar tissue there from my previous section. Maybe the hard spots are adhesions, but I really dont know. I get several hits from people looking into VBAC and I guess my point is this: Go for the VBAC! Especially if you have delivered vaginally before. Deal with another week or 2 of being uncomfortable pregnant to avoid weeks of being uncomfortable afterward while you recover from surgery. It's easier to recover from a natural process than surgery (I know there are some exceptions). I guess I'm telling myself "I told you so". I'll end on a positive note with a picture of Isaiah: 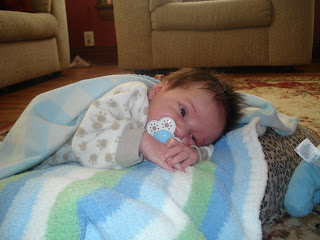 I'm sorry you're bummed about your decision for a repeat c-section, and that your recovery is not going as smoothly as you'd like. You're right; c-sections are a tough recovery. Your post made me realize how right you are: natural childbirth is so much easier to recover from! I just had a VBAC on December 24th - welcomed son #2. Though it was tough to "wait" for labor, I'm so glad I was able to attempt and complete VBAC - what an amazing experience! Our bodies were made to do this! (son #1 was born via emergency c/s under GA - traumatic all around - I'd take vagnial delivery again ANY day!)
Regardless, Isaiah is beautiful & I'm sure he's happy he came when he did :)
Beth in Michigan

Don't beat yourself up! I do appreciate this post very much though. I had a c/s in 2004 that was likely not terribly necessary. I am now planning a homebirth VBAC for September. I know that if I go to the hospital I'll probably get cut open again. My recovery from my c/s was pretty easy, but I have heard that the more c/s you have, the harder the surgery and recovery due to scar tissue. And well, I really don't want to "birth" any more babies surgically unless it's absolutely necessary.

Anyway, thank you for your honesty and for sharing how you feel.
~ Kimberly

I'm so sorry you are regretting your decision. I had a really rough recovery from my cesarean, so I can definitely identify with how you are physically feeling. It's hard in our society because it seems that the overwhelming attitude is to encourage women to have a repeat cesarean. It's as if people forget, or purposely downplay, how difficult recovery from a cesarean is while simultaneously acting as if vaginal birth, particularly unmedicated, is an unattainable, and even stupid, goal. I had a wonderful home VBAC in November 2007 and it was far less painful than my cesarean recovery... and I had a very painful birth. (My cesarean and home VBAC birth stories can be read at vbacfacts.com.) I applaud you for being honest about your recovery. So many women seem to be happy with their "easy" cesareans and I think it's important for women to read experiences like yours. Unfortunately, no one knows before the surgery what kind of recovery you are going to have... and to be enduring recovery from major surgery while caring for three kids... my heads off to you.
Take care! :)

I think the regret you are feeling right now is completely normal. And I think it is okay to have regrets/questions about a birth yet be thrilled with the outcome (the baby). They are two different things and you can feel two different feelings about it. Give yourself time to process it, and you'll come through to the other side soon. Redspiral's blog (the other doula Kristina) has some great cesarean birth processing recently if that might help :)

You had a tough last few months, with all that irritable uterus stuff and working all that night shift. And then there was all that coming and going CS/not CS.

Give yourself space to feel this regret and keep taking the anti-inflammatories and acetominophen.
Undermedicated pain will not help the situation and will lead to chronic pain. It is NOT weakness, it is genuine pain.

Hope it resolves soon, and be gentle with yourself and your psyche.

Your boy is pretty gorgeous too. What a lovely set of children you have grown and brought forth.

Sending you settling and soothing thoughts and a big hug

Thank you for sharing your feelings. I'm glad I found your blog. :)

I am sorry that your recovery was so painful.

I am posting this because there are cases where repeat cs are the better option. I am tired of reading accounts where people act as though they are a victim because they were given a choice and have to recover from a surgery with a healthy baby to show for it.

I was not given the opportunity to choose a cs and my son died 17 hours after a failed vaginal birth because the ethos was that cs should be avoided.

Be thankful for your child and thankful that you have choices. And PLEASE ladies, be careful before you make blanketed statements like "society feels". There are strong opponents and proponents on both sides of the debate with good reason.