I am a cat lover. As long as I can remember, there was always a cat around. I actually can't remember a time that we didn't have at least one, usually two. My cat, Audrey and I met in 2000, when I picked her out of a litter of all black kittens. For some reason, she stood out, maybe it was her attitude, but I can't remember. And boy, does she have an attitude! When she was a kitten, she was ferocious with her claws, so I had her front declawed, but then she learned to use her back claws equally well. She slept at the end of my bed every night until Husband and I moved in together. Husband had a cat, Bradley, and Bradley decided that the bed was where he needed to be. This pissed Audrey off, and for a few years, she would refuse to be on the bed. I remember tossing her onto the bed, and she bounced off of it like she was on a trampoline! They now tolerate each other and even get along sometimes. Other times, he ticks her off and she hisses and runs away. I can empathize with her! She'll let you pet her on her own terms, but won't actually sit on your lap. Maybe next to you, but never on you. I call her Bitch-cat because of her attitude. She has mellowed some over the years but she's still a bitch-cat. In her younger years, she would have been a great bird cat she was so wicked and fast. Now that she's older, she quite large and doesn't like to jump much higher than the bed or couch. You can tell that she is truly my cat. We have an understanding: I feed, water, brush her and clean her litter box (well, that's is now delegated to Husband) and she allows me to live here and pet her from time to time. Cats are funny creatures. As much of an attitude that she has, she has always been around as a "protector" while I am pregnant. I noticed it when I was pregnant with Jacob. Like I said, she wouldn't sleep on the bed after Husband and I moved in together for years. Until I got pregnant with Jacob. She then started sleeping on the bed next to me every night, and it started very early in the pregnancy, before I even knew I was pregnant, and lasted until my last day a pregnant mom. Of course, after we brought Jacob home, she was ticked for awhile that this screaming, squirming small human was around, but she got over it. And she stopped sleeping in bed with me. Until 6 months later, when I was pregnant with Clara. Again, after Clara was born, she stopped, until one night in 2007 I found her on the bed, and I soon found out I would have 3rd child. I should have known something was up this summer when she started sleeping at the end of the bed. When I'd come home from work and sit at the computer, she started sitting there next to me, staring at me, like she was saying "OK, come on, it's time for bed, hurry up". When I get up, she'll lead me up the stairs, jump on the bed and after I am situated, she wants to lay on a pillow (she is high maintenance) and we go to sleep. For some reason, I didn't really think about it. I finally figured out why she was suddenly there in bed every time I went to sleep the night I took the pregnancy test! It's really kinda funny. Bradley doesn't seem to notice, maybe because he's male. A RN I work with who has 2 dogs, one female and one male, just found out she was pregnant and she said her female had been following her around the house over the last 2 weeks, as well as her mom's female dog. It's like they know or sense it somehow. They know we are doing "women's work" and Audrey thinks I need my sleep. It's kinda nice, having a black cat as a protector. I'll enjoy it for the next 30 weeks. 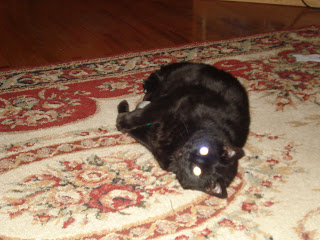 With my first, I ended up with a nasty infection in uterine lining. (40 weeks at that time) Before I, or anyone else knew there was an infection, my husband's border collie began climbing into bed with me at night and laying her head on my huge belly. She wouldn't get down or move her head from my stomach. Normally she listens when you tell her to quite but not this time. This went on for a few nights till I ended up in the hospital with a high fever. Immediately, I realized what she had been trying to tell me. My entire pregnancy, she had been watchful of me from the floor but never moved up to the bed. Animals are awesome. I now call her my guardian angel. I would believe her over a doctor. ;)
Jamie

I'm a cat lover too, my husband and I have two. I was quite curious when around my 14th week of pregnancy, my little tabby Maya started snuggling up to my barely-there bump and kneading my belly. Maya is a bit of a peculiar cat; she's fairly aloof most of the time so her newfound snuggliness was very different for her. My Nurse Practitioner was counseling me on toxoplasmosis safety at my next prenatal appointment when I happened to mention my cat's funny behavior. My Nurse told me that because cats can hear a range of frequencies much wider than humans, it was quite possible that Maya could hear the baby's heartbeat, an idea that made both my husband and I giggle.