I finally got a chance to sit down at the computer this morning. Husband took the two older kids to church and was going to get groceries after, and Isaiah has decided that his sleep time is in the late morning. He really is a good baby. He doesn't cry that much (yet), he nurses great, and really he sleeps pretty good so far. Jacob and Clara seem to have taken to him. There is some jealousy, of course, but they want to hold him, help change his diapers and they try to give him his paci when he's crying. It's pretty cute. Anyway, here's a run down of Isaiah's birth
It was about 5 degrees and windy the day we went in to the hospital, and of course, OB was busy. There weren't any postpartum rooms open, but there would be as people were discharged. I was really surprised at how nervous I was. Nervousness was to be expected, but it was hard for me to relax. Anyway, my co-workers had made me a diaper cake and had gifts waiting for us in our room. They got me ready and then checked to see if he was still breech. He had flipped around the right way. Of course. We decided to go ahead with the c-section anyway because we had planned on that day, I had a c-section before, I didn't want to be induced, and I was just anxious to meet my son. So, I walked back to the OR, everyone did their thing and I was finally able to relax once they started the surgery. They had a heck of a time getting Isaiah out because of the way he had wedged himself into my pelvis. My old incision was too small for him because he was more than 1.5 lbs bigger than Clara was. It seemed like eternity for me because I know the usual time frame it takes once they've gotten to the uterus. The scrub tech said "he's got an inch of dark hair" so I figured any second now. But, it was a bit longer. They pulled and tugged, cut the incision larger and used forceps to get him out. (needless to say I'm sore) It probably wasn't that long but when you're waiting, it seems like forever. Husband went with the pediatrician and baby to the nursery while I was stitched up and moved back into the labor room I had to stay in until a postpartum room opened. One of the things the anesthesiologists do here is they give a form of morphine in the spinal called astromorph, and it lasts about 18-24 hours. One of the side effects is itching and last time, I itched until I'd broken out into a rash. It was miserable. I hoped to avoid that this time and anesthesia said he's make sure I had medication to counteract that side effect. Well, I started itching before I left the OR. So I kn ew I was in trouble. Over then next 24 hours, I was given multiple meds to help with the itching. The only thing that really helped was narcan. It reverses the effects of morphine, but it takes away some of the pain control. But, I wasn't hurting and I'd rather hurt than itch. I felt better after the narcan, plus Benadryl, Zofran and Nubain for breakthrough itching. After I got over the itching, I started having right shoulder pain, which was referred gas pain. I walked, a bit too much which I paid for later on that night, drank prune juice (nasty, by the way) and took a suppository to help. It wasn't until the day I went home that I really was able to pass gas. But, back to baby. He was 7lb 15 oz and 20 inches long. He has dark hair like Jacob, but looks more like Clara in the face, but sometimes I can see Jacob in his facial expressions. The first hour, when most babies are in the "quiet alert phase", where they just look around, he decided he wanted to scream. All he did was cry, and we thought we were in trouble. I finally got him to calm down and nurse and things were better after that. Out of the three kids, he's the most laid back.
Recovery this time has been a bit more difficult. Part of it is having a 3 and 4 year old to tend to. Husband has been great with doing all the household things, and lettting me rest. My incision is really ugly. It's still swollen, mainly on the left side where the most pulling was happening trying to get the baby out and that's where they cut it a bit larger. Doc assured me that the swelling would go down eventually. Even though I had hoped that things would have gone smoother, I'm ecstatic that Isaiah is here. I know that I was very uncomfortable the last few weeks of pregnancy, and the first 48 hours post-op sucked, but I can't really remember the pain or itching. And I would even do it again. There's nothing like meeting your child for the first time, seeing the recognition of your voice in the baby's eyes, or watching your older children with their new sibling, or seeing your spouse be overly gently when handling the baby so as not to hurt him. This pregnancy went by so quickly, and I know it wont slow down now that he's here, so I'm really trying to savor this time before its gone. Here are some pictures. I did include a picture of the actual surgery, so I hope I dont gross anyone out. 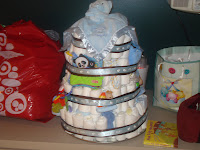 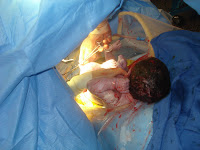 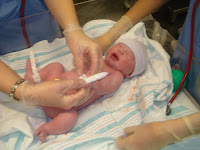 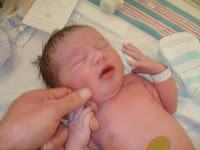 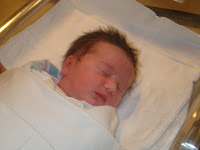 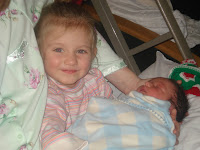 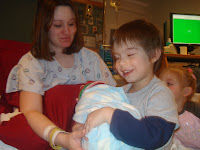 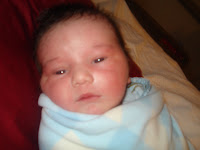 Wow! Congrats! He is absoluently beautiful!

Do you happen to live in Illinois?

Pretty little guy! Nice birth story. Ahhhh...I just love all the gentle kindness after birth, I could just eat it up...