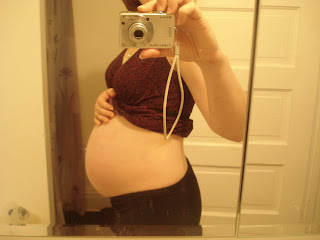 Ah, I'm in that final 10 week countdown to D-day! Nine more weeks until my EDC but likely only 8 more until I'm delivered! Seems crazy! I'll be holding my new son in less than 9 weeks!! Eight weeks isn't really too long! I know from my last 3 pregnancies that these last weeks drag on and on it seems...until it's over, I've delivered and then I wonder how the hell the pregnancy is over already. So far things are going pretty good. Baby boy is still pretty active and I think because this ol' uterus has been stretched that he's able to twist and turn and roll much more than the other 3 kids could. It's fun watching my belly move and change shape...Jacob and Clara think it's hilarious and amazing watching him move. I did have to be monitored and get some terbutaline shots last weekend to stop contractions, and I'm now on oral brethine on an as needed basis. No bedrest, and they didn't check my cervix but I assume it probably didn't change. I see Doc Tuesday and we'll go from there. The brethine seems to help. Night is my worst time and the other night I had a round of contractions that hurt bad enough all I could do was contract, had to breathe with them and they were coming every 3-5 minutes. I did take 5mg of brethine, drank a ton of water and they eventually eased up after a couple hours. So obviously, they really weren't too horrible or the brethine wouldn't have helped, but it freaked me out for awhile. Makes me wonder if I'm just a wimp, but I have labored before, and these hurt, and hurt a lot more than any of the other rounds of contractions I've had. The nursery is set up, I'm starting to get all the stuff I need/want for my hospital bag and maybe one of these days I'll get around to packing it...just to ward off any preterm labor. (You know how superstitious us nurses are! If you're prepared, it won't happen.) But for now, I'm still hanging in there, things are looking pretty good, and most of the time, I'm fairly certain I'll be one of those pretermers who contract and contract and then end up carrying to 42 weeks! And full term is just fine with me!