labwork and sono and doc appointments, Oh My!

Its been a busy couple weeks for us. As I mentioned, we have had some issues with Caleb and his weight. It started I guess about 3 weeks ago. He started spitting up after eating, more like projectile vomiting large amounts after most of his feedings. He never acted sick, always had a good appetite, kept having wet and dirty diapers, etc. Nothing seemed too off. I didn't think too much about it, figured he wasn't burping good, and this was something I did as a baby. It gets to be close to 2 weeks I guess, and over a weekend (our furnace was out at the time, but that's another story) Husband mentioned that Caleb had been pretty fussy, not wanting to sleep. Come Tuesday am, he mentions he was making odd noises when he was breathing, like he was sighing after each breath but it only lasted a couple minutes. I went to feed him at daycare after I got off work that morning, and he seemed to be his usual self, he did vomit all over me but seemed fairly happy. When I picked him up that afternoon, he seemed pretty sleepy. He usually gets very excited to see me but he went right back to sleep after I loaded him up in the car seat. My mommy-intuition kicked in and I decided that I would take him to the after hours clinic, just to make sure he didn't have something like RSV. I get there and the first thing they do is weigh him - only 11lbs 8 oz. I immediately start to panic because I swore that was what he weighed at 4 months. The NP saw him, said he had an ear infection, but lungs were good but the real issue became his weight. The next day, we went to Hospital for a pyloric sonogram to rule out pyloric stenosis. Caleb hated it, but it was fine. He also had some blood drawn and a urine sample done. All the labs were fine except his albumin was low. So that bought us a trip to the Children's Hospital in Bigger City for a sweat test to rule out cystic fibrosis. Now even though I knew it was impossible for him to have it since I am not a carrier, I still was a bit anxious about it. It of course came back negative. By now, it's Friday and he had stopped vomiting. We've started solids and try to supplement with a bottle of formula a day. But in true style of my children, he refuses the formula, will take bmilk out of a bottle just fine, and doesn't really like the solids. I would just supplement with bmilk, but I don't really have enough stored. I'm down to six 5 oz bottles in the freezer. I took him back for a weight check on Wednesday and in a week, he was up to 11lb 10 oz. I actually think he gained more because the initial weight of 11-8 was in a diaper, and this one was without. But the fact that he's 6 months and still hasn't doubled his birth weight and is gaining so slowly is concerning. We saw a pediatric GI doc yesterday and she was actually very encouraging. She said a 2oz weight gain in a week was great. She also thinks he may have reflux, which could explain why he hates solids like he does, so we now have zantac for the little guy. She also thinks that this whole thing stemmed from the ear infection/virus he had, and he dropped weight from the vomiting. The low albumin she said wasn't really a good indication for his current nutritional level, so she wanted to have a pre albumin done, along with repeat CMP and urinalysis. She was very pro-breastfeeding and wants me to try to get him to take 6 oz at a feeding (a no go so far) and if I don't have enough bmilk to supplement, she wants us to give a high fat formula (which I still need to pick up from the pharmacy) and try to get about 4 oz of that in him a day. We will have weight checks every week for 4 weeks and we'll follow up with her then. If he doesn't put on much weight, then she'll give us the high calorie version of this formula. But she was fairly confident he'd be fine. I did have my moment on my way to work last night because the diagnoses for him are GERD and Failure to Thrive. I remember learning about failure to thrive in nursing school and the way they presented it, it made it sound like the parents were doing something wrong. That isn't the case, but there's a sense of dread over that diagnosis. Plus it just makes me sad that once again my body is "failing" me and not providing for him like I want to, and should be able to. And even though I know that really isn't the case, all you mommies out there know what I mean - no matter what, there is still that part of all of us as moms that makes us feel guilty. So last night on my way to work, I let myself cry about the whole failure to thrive diagnosis. But, he is a happy boy, meeting his milestones like he should and hopefully we can plump him up.

And as a bonus, here's my cute little bubs: 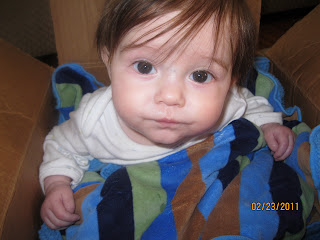 Oh my goodness, look at those big, beautiful eyes! He is absolutely gorgeous :) I hope everything clears up soon and the little guy plumps up. You're doing great Momma, don't let "failure to thrive" get you down!

Reflux can be ROUGH. My first boy went through it from about 5 weeks until around 8 or 9 months. We tried Zantac for bit, but found Prevacid worked much better. He stayed on that for quite awhile. We ended up taking him off of it around nine months, and he did fine until after his first birthday when we had to put him back on it for a couple of months. It definitely isn't a fun time for the little ones, but they do eventually get stronger. All I know is that you'll probably have a MUCH happier baby now that he's on it :) You may not see results for a few weeks, and if you don't, ask for a med change. He'll gain weight before you know it!

I hope this helps to reassure you. My youngest also had difficulty with gaining weight around this age. I also was only breastfeeding. At 4 months, she was 12 lb, 12 oz. At 6 months, she was 12 lb, 14 oz. Only a 2 oz gain in 2 months. We started solids (high calorie ones) and adding some formula to the breastmilk at bottle feeds. The ped was making comments about failure to thrive.

Needless to say, her weight was up to 14 lb 8 oz just one month later.

She has always been on the small side with the growth charts. To this day, she is 7 1/2 yrs old, and is skinny as can be, and weighs about 45 lbs.

Let me tell you, I've had the weight issue with BOTH my kids but the reflux with the second.

She would throw up after EVERY meal. The docs weren't concerned, though I said it was reflux. Finally weight became more of an issue and they did every test under the sun but found nothing. Since this his my second baby with weight issues, I'm over worrying. I actually skipped the last two weigh ins because I'm over freaking out. She stopped puking the second they prescribed the zantac so I'm sure with us it was a 6 month bout with reflux but the bigger issue with us is, we just have small kids. My husband isn't big, I'm not big, it's in our genes. Don't let the docs freak you out!

You can check on facebook to see if there is any milk for donation at your closest "Eats on Feets" or "Human Milk for Human Babies" network. Then you can supplement with that, instead of the formula he seems to hate.

[btw, the word verification for the comment is "offer" -- quite a coincidence, since I'm suggesting you look to see if a woman has any breastmilk to offer. :-)]

we have so been in your spot. I am praying for you and this precious blessing

My youngest son had reflux and consistently stayed in the 10th percentile for growth...he is now 7years old and still as skinny as can be...but healthy!

I'm sorry for what you're going through.

I think if his weight starts going up slowly then it'll all be good. Trust your 'mama gut' (and nurse gut) and don't do the formula if you don't think he needs it. If you really feel the need to supplement and are comfortable with it checkout Eats on Feets or Milk Share in your area.

You can also check out fenugreek and other meds to increase your supply and pump output if you think that's an issue.

I just want to say that I think you are awesome. I can't imagine working the shifts you do and managing to pump enough to EBF. You're doing a great job and keep it up.

I am going through the same thing. We are in the beginning stages. Lab work and xrays next week. I am nervous. My Daughter Everly is 6months old and weighs 10lbs 3oz. She still wears newborn/0-3m clothes. The dr is just now concerned. She does have reflux. My middle child also had reflux (worse than Evy) and she is/was just fine. The Dr. made me stop breastfeeding at 4 months because she said Evy was allergic :(. Everly is my 3rd (and last) baby and is the happiest baby I have ever seen...Seriously NEVER cries unless its time to eat. She is so laid back and what I would consider the perfect baby! Sorry for rambling im just nervous and have never really heard of Failure to thrive. She was 5 wks premature and weighed 5lbs 6oz. She was in the NICU for 10 days. She is what I would consider a really healthy baby(except for the whole tiny issue) ...never sick, no ear infections, eats all the time, sleeps all night. Anyways its nice to know Im not the only mom going through this!