Showing off the kids again

I'm pretty tired so instead of typing one of the many post I have floating around in my head, here are a few pics of the kiddos.

We had a fun night playing with this tent and tunnel set I had bought for Jacob when he was 12 months old. The tent has circle openings on 2 sides and this cool tunnel will hook up to it or you can just play with the tunnel. The kids had a blast.
Jacob and Clara, hanging in the tent, with lots of static electricity. I look at Jacob and can't believe that he's going to be 6 in a couple months. And Clara, poor girl, looks just like her Mommy. Isaiah, too, for that matter. 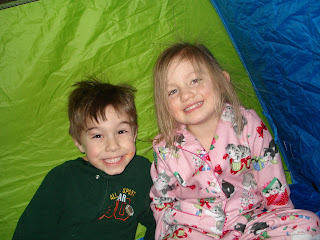 Jacob and Clara both got into the tunnel and were rolling around the room. 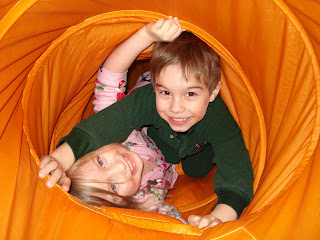 I still can't believe he's almost 15 months old already! He's developing quite the attitude. When Jacob or Clara takes something from him, instead of just letting it go, he's started running after them, hits or grabs hold of something, ie hair, clothes, the toy itself, and screams at them. Part of me is torn. On one hand, Isaiah does not need to do that, but at the same time, the older 2 need to stop taking things from him. He's such a stinker. Then later on, he'll come running over to you, wanting to be picked up and he'll give you a full body hug and kick his legs and lay his head on your shoulder. Then he wants a kiss and he leans toward your mouth, with his open and gives you a wet, slobbery kiss. 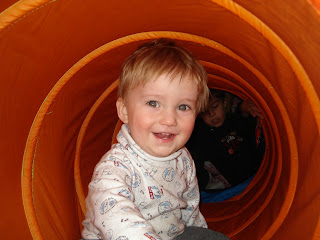 Group pic! Jacob and Clara still have cheese puff powder on their faces, and Isaiah had had just about enough at this point! We really did have a good time playing together as a family. This is what it's all about: 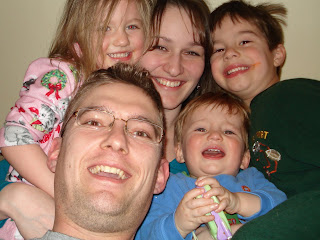 I had been working on my grocery list and had my envelop full of coupons out on the table. I walked away for just a minute and came back to fine Isaiah, The Destructor, scattering my coupons all over the dining room. He was picking up a few here and there and tossing them over the gate into the kitchen from time to time. Notice in the background the wall with the wallpaper missing in one place? Yep, Isaiah left his mark there! 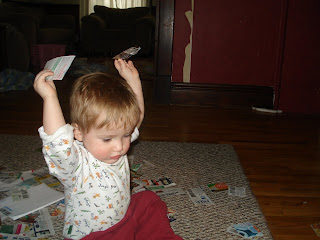 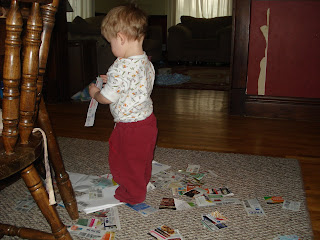 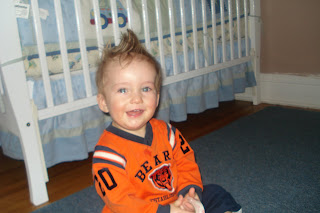 your family is gorgeous!

I love the mohawk!