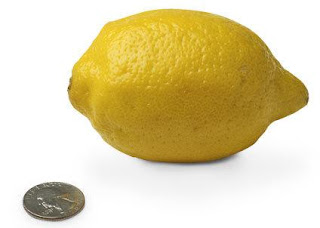 So babe is about the size of a lemon according to babycenter.com. Again, I love the fruit analogy!

S/S: I'm starting to feel better. I tell you what, that first trimester really kicked my butt. My energy is coming back so I'm able to get my usual stuff done around the house and play with the kids like I usually do, without feeling completely wiped out. Nausea is almost completely gone. Not sad to see that symptom go. If I eat something I know I shouldn't, like greasy pepperoni pizza and then ice cream, yeah, it makes a reappearance, but for the most part I'm feeling pretty good. Not feeling any movement yet. I can't wait, but it'll be a couple more weeks, at least. I think with the other 3 I felt that first flutter at 16 weeks. My main complaint in constipation. Man, oh man, is all I can say. I don't remember this with the other kids, but the mind is good at remembering only the good parts. Here's an example without getting into graphic detail. The week I went to New Orleans, I went from Monday to Saturday with nothing! I'm sure some of it was the plane and the traveling but you should have seen the size of my abdomen! I do have colace and I'm eating better since I'm not nauseated constantly, so I'm hoping it will get better.

Cravings: Really I haven't had much in the way of cravings. I've been enjoying potato and cheese pierogies the last few days (lots of carbs), and Triscuits with cheese. I'm also able to enjoy a diet Coke again, so I allow myself that morning indulgence on most days.

Aversions: Nothing really makes my stomach turn anymore! I do remember with the other kids craving a Margarita (obviously never indulged) the whole pregnancy, thinking I'd have one once I delivered, but never actually did. The mere thought of alcohol makes my stomach sour this time.

Running: Haven't really been doing too much. I'm just trying to maintain some level of exercise and I'll run 3 miles when I have time. My half-marathon I signed up for a few months ago is this Saturday. Everyone that is running is excited and it makes me wish in a way I was taking part in this run. There are 13,000 runners among the 5K/half/full marathon! It's going to be huge. But, I'm sitting it out for a good cause, and there's always next year!

Appointment: It went well yesterday, although I could have done what Doc did at work, without the 1 hour wait. I can weigh myself, take my BP and listen to the babe. But, I did want to see what she said about the whole platelet thing. She said if there was a problem, they wouldn't have gone back up, but that we'll just keep an eye on things. Okay. Baby sounded good and we could hear him/her moving around, BP 94/50, usual for me, and no weight gain, yet.

Girth: I actually had a patient's mother ask me if I was pregnant! I have a rule that I NEVER assume someone is pregnant unless it's very obvious, like they are normally 140 and they are probably 8 months along. What if I wasn't pregnant? Wouldn't she have felt bad? And I don't really feel I look that pregnant, especially in those lovely flattering scrubs. Ok, so down in New Orleans, when my bowel was full of stuff, I had someone say "Oh, you'll want to do this cruise because you're pregnant and won't want this boat's food". Ok, I understood that because of the way the shirt was cut and I was pretty distended, but come on, in scrubs? Really? I really don't mind and wasn't insulted in the least, I am pregnant and it's nice when you do hit that point that it's obvious you're with child and not just drinking too much beer. I'm still in normal clothes, although I have a rubberband holding the buttons together. But like I said, in a week or two, I'll have to give in and wear maternity clothes.

And here's a belly pic for your enjoyment. I feel much larger then what the picture shows, especially in the evening. 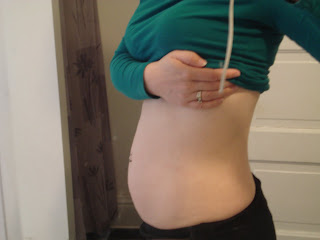 I am so glad that everything is going good this time. I love to read your updates!

But, wah! I look more pregnant than you and I'm not
;) Time to get off the computer and exercise!!

does this mean everyone at work knows your pregnant now?

That's a great belly shot! Will you be finding out the sex of the baby or waiting until he/she is born?