Isaiah is already 3 months old. Man, time flies. He's doing really well with his head control. He's tried since he was born to hold his head up to look around, and he's doing pretty well with in when he's on his belly. He's also incredibly vocal. I don't remember Jacob and Clara making so many different noises when they were his age. He has a definate "I'm pissed" squeal, "I'm bored squeal" and just happy noises. As long as someone's talking to him he's good. But leave him alone when he's in the mood to talk and he'll start making noises, like he's saying "Hey, where'd you all go? I was talking here, get back here and pay attention to me." It's pretty cute. He's still not sleeping much better. Most of the time he falls asleep about 8:30, gets up to eat about 12:30 and 5:00. Last night though he threw in an extra feeding at 2:30. I know eventually sleep will come. 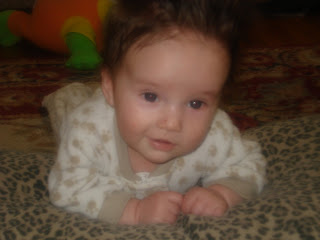 Here's his hair in all it's glory. If we comb it down while it's wet, it is more tamed, but still wild. 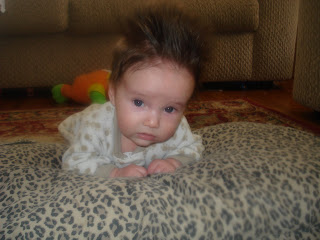 Clara with the bear she got from the Easter Bunny. He left it at Grandma's house and she brought it over for her. 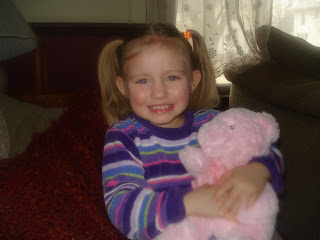 Here's Jacob "webbing me". He's quite a character. 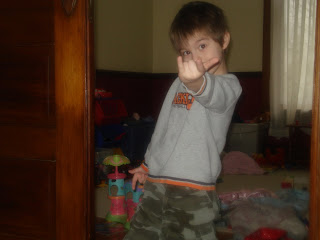 holy cow those are some adorable kids!