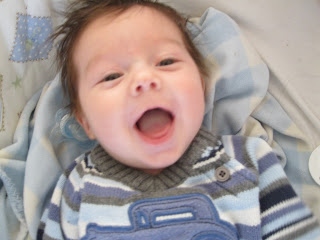 Little Caleb is 3 months old already! He is still a very happy, easy going baby that hates to be naked and taking baths. I do hope that he will eventually love his bath time, but for now, he screams every time. We've tried different things, using his baby bathtub, the sink, and I've even gotten in the bathtub myself and brought him with me, hoping that would help, but no. He still hates it. Caleb is sleeping through the night from time to time. Most nights, he falls asleep around 8:30 or 9:00 and will sleep until 3:30-4:30. He'll eat and go back to sleep. It's has been wonderful. He got his 3rd Synagis vaccine a couple days ago and he's up to 10lbs 11oz. It seems so small to me for a 3 month old, but he's growing and I have to remind myself that he started off much smaller than my other kids. He is so close to a full out belly laugh. He smiles that big toothless grin, coos and almost laughs. I can't wait until he finally lets it out! The older kids will get down and talk to him he is just fascinated with them.

As for me, I'm trying to get myself motivated (again) to start running. I had been doing ok for a few weeks, but then I got out of it again. It's just so hard to get out after Husband gets home, drive to the gym and run. I'm 8 lbs from my pre-pregnancy weight but I'm hoping to lose about 20 lbs. I can get into 2 pairs of my jeans, and I should really buy another pair, but in my mind that would be surrendering to those last 8 lbs. They'll come off eventually. I did finally break down a few weeks ago and made an appointment to see the Doc for post-partum depression. It was a very hard phone call/appointment to make. It all started right after delivery. I figured by 6 weeks, my hormones would even out and I'd be fine, but that's when I started feeling even worse. I was irritable. I would lose my temper over little things that I wouldn't have even noticed before. I'd hear myself screeching at the kids and wonder "Who is this woman?" Sleeping was difficult even though I was exhausted and all I wanted to do was lie in bed. That just isn't me. And the crying, oh, the crying all day everyday. I kept thinking "Why can't I handle this? I should be able to handle this". I kept blaming myself for things that went wrong and for Caleb's preterm delivery, even though the rational part of me knew I had no control over that...and then that made me just feel crazier that I could still feel guilty yet know I shouldn't. Then the anxiety started. That tightness in my chest and racing heartbeat and worrying that something was going to happen to Caleb was miserable. At night if he didn't wake up, I was constantly checking to make sure he was breathing. It was a very dark and lonely few weeks. Husband had been on me to call for several weeks and finally I decided that something was wrong and that I needed to be seen. So I go into the appointment and when Doc asked me what was going on, all I did was burst into tears. I realized afterwards that I didn't even tell her everything that was going on, but I think between the tears and the post-partum depression test I took (and failed) was enough. She gave me an antidepressant and I am starting to feel better. She wants me to take it for at least 6 months and then depending on how I feel, I can start to wean myself off of it. I never thought in a million years I would be taking a med for ppd, but it has made a difference: I'm able to sleep at night again, the anxiety is gone and even though I still have days I'm not feeling great, I know in a few more weeks I'll see more improvement (hopefully) because it takes several weeks to get the full benefit. I don't know why I waited as long as I did to go in because its not something you have control over and should never feel ashamed of. We'll see how the next few months go. Hopefully after 6 months my hormones/body will have regulated itself and I can stop taking this medication and still feel like Me.
Posted by Nurse Lochia at 8:47 AM

Good for you for getting help! I was the same way after my last baby (and probably the others too, but didn't admit it). Remember that there are lots of anti-d's out there, and if you aren't feeling like "you" on the first one, talk to your doc. I was on zoloft for a while, feeling better but still....wrong (if that makes sense), and waited months before mentioning that to my doc. A switch in Rx and I'm back! It's wonderful. Congrats, and keep taking care of yourself too!

I went through something very similar. It is really hard. So many feelings/thoughts that you otherwise would not have. Yay for the hubby urging you to seek help! I hope you continue to feel better and better. I can't believe he is 3 months already!

Oh what a gift you have in there!

Following your lovely blog and inviting you to add this at Momma's Lounge - a mommy blogger directory and more, where you can also meet more mom bloggers like you and get connected with them by visiting your profile after registration.

You can also add there your giveaways and business links; get featured by sharing your crafts, recipes and interesting musings.

Following us back is deeply appreciated.  Thanks and have a great day!

P.S. What is your greatest Christmas gift from year 2010? Check here  or share right here (to get featured).

I am so happy to hear you went and got help.

WOW I can not believe he is three months already. He is adorable

He is gorgeous! So glad you were brave enough to seek help and are feeling better!

You have one beautiful babe there! wow!
Good for you for accepting the help in taking care of you.... Darn hormones.....
Take care!

We are here for you. I think that these feelings are very common. :)