I've made it to the half-way point! I can't believe that in another 20 weeks, I'll be holding a new baby! I'm feeling pretty good. I'm feeling quite a bit of movement and Husband was able to feel the baby move for the first time last night. I swear this child likes to do acrobatics on my bladder. It is very reassuring to feel all the movement...although it's just light little kicks and punches now, in a few weeks they'll be much bigger. I had the anatomy US this a.m. and everything looked great! It's such a relief, especially for a paranoid pregnant mommy like me! Heart had four chambers, regular rhythm, 2 functioning kidneys, fluid levels good and the baby is measuring a few days ahead of my due date of 10-27, and more along the lines of the EDC my LMP would have given of 10-22. But there's no need to change the due date at this point. Plus it's a matter of a couple days, so I think it's better to keep it where it's at. Oh, and we were able to see what this little one is.... 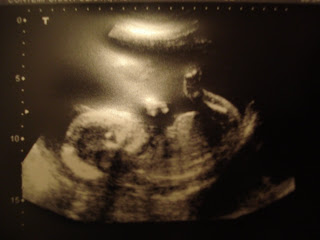 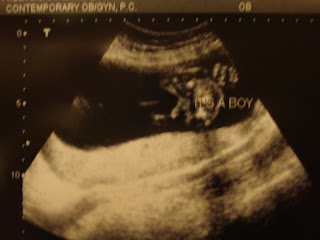 He was quite willing to show off his goods. The sono tech kept laughing, saying that it seemed he wanted to make sure we knew he was a boy! Even when she was getting profile shots, he was "presenting"! I hope that's not an indication of the future....a 2 year old running around after ripping a diaper off! We're pretty excited. Clara had hoped for a sister, but I think she'll see the benefit of not having a sister - no one taking her clothes, make-up, jewelry, etc. It would have been nice for her to have a sister, but Husband and I didn't care, we just want a healthy baby. We are going to have to sit down and try to come up with a name. We had a hard time coming up with Isaiah's name, so now we are really low on ideas. It has to go with the other kids names, so it's not like we can have some trendy, modern name either. I kind of like Samuel or Caleb, leaning toward Caleb, but Husband isn't sure yet. But he doesn't have any alternatives. The day I ran across Caleb, I called Dr. Sis and asked her to give me a suggestion, without telling her I thought Caleb would be alright, and her suggestion was Caleb. That's a sign to me! We have some time to think about it, and search through more names. Any suggestions would be great though!
Posted by Nurse Lochia at 11:31 AM

Congrats on Baby Boy #3! Glad to hear your US went well, and you're feeling well.

I agree...boys names are hard, especially the more you have :)

We have three boys and I have no idea how we'd name a fourth one if that were the case.

How about Solomon? We had a great-uncle named Solomon (everyone called him "Saul," apparently). We were going to name our baby that, but we have nothing but girls!

Congrats! I have my scan next week and I can't wait to find out what I'm getting.

We have four boys and had a heck of a time coming up with #4's name. That's technically 8 names to come up with, including the middles. Anyway, he was Wyatt for the last several days of my pregnancy but became Luke in the elevator on the way up to delivery. It works because his older brothers wanted me to name him Darth Vader so I tell everyone that was my compromise.

I like Caleb, too, but I'm partial to Samuel because I have a Sammy at home and he's a total doll.

What a magical time for you and your family! Enjoy!

Glad things are going well for you :)

I have three boys... a name that I considered for all three but never ended up using was Grayson ... in retrospect I kind of wish I'd used it for my last son.

I also really liked Jace and Sawyer, but hubby said no.

We like the name Judah for a boy (plus you could call him Jude for short).

I love looking at ultrasounds. Such potential - what will this baby become? What life will he live? I'm lousy at names, but I would like to lend my congratulations and best wishes for a safe pregnancy, labor, delivery and recovery. You'll pick the right name for your baby, and you'll wonder how you could have ever thought of naming him anything else!