Tomorrow, little Bubs will be 7 months old. I can't believe it. It still seems like yesterday that I was pregnant with him. he is finally starting to put on some weight. Over the last month or so this has been going on, he's had multiple blood draws for various things, sweat testing, GI consult, etc. After the first consultation with GI, she gave us zantac for reflux, and I was told to give him about 3 oz of this special order formula called pregestimil. It is incredibly expensive and apparently tastes awful. I really tried to get him to take it, but as soon as he started sucking on the bottle, he'd gag and throw up all the bmilk he had just had. So, go figure, he hadn't gained in a week or so, and then I was told to quit nursing and mix the pregestimil so it has 24 cal/oz instead of the usual 20cal/oz because she didn't think he was getting enough from me. I was devastated. I also knew that wasn't going to work because he didn't like the formula mixed regularly, so he sure as hell wasn't going to take it concentrated. Plus you don't take a 6 month old breastfed baby and say "Ok, no more nursing" and have it go well. But I tried it, pumped to keep up my supply because I really didn't agree with no more breastfeeding, especially because it wasn't that they thought he had an allergy to something in it, it was that they thought he needed more. So why not just supplement with regular formula. It was awful. He cried all evening and all night, refused the bottle, and he kept looking at me with those big beautiful eyes, pleading with me to feed him. Finally, at about 11pm, I said to heck with this, nursed him and gave him a bottle of regular ol' enfamil, mixed to be 24 cal/oz, which he took. We also started adding a few drops of safflower oil to his baby food, for extra fat. So I called our pediatrician, told her what I was doing and she said to go with that because if he's refusing the other formula, then it isn't doing any good. And guess what? He started gaining. The zantac helps with all the spitting up he had been doing, and the extra calories from the formula has helped. He put on 1 pound in a week. He was only 11lbs 9 oz a month ago...hadn't even doubled his birth weight at 6 months. Last week he was 12lb 8 oz, Monday he was 12-15, and Tuesday he was already up to 13-5. Different scales, but still a gain. I had worried about my milk supply since I went back to work. Caleb was never as aggressive of a nurser like the other kids were, and add to him being early, I didn't pump before going back to work as much because I was busy, and I don't always get to pump at work and you get inadequate supply. I know I could work a bit harder to build it up, but honestly, I don't have time. I am taking fenugreek and blessed thistle to help amp up my supply and it helps a bit, I get about 1/2 - 1 oz more when I pump when I take the herbs. So that's where we are: Caleb still gets to breastfeed, he's putting on weight with the supplemental formula and spitting up a little less. I don't understand why we had to jump right to this special formula. It's so expensive and I now have 2 cans that won't be used. I'll donate the unopened can, but the other was a waste. For a 16oz can of the stuff, it was $44. A can of regular enfamil, same size? $13. Yeah. It's that expensive. Husband tried it (he's weird) and he said it's horrible. You can tell by looking at it when it's mixed up that it has more fat in it because it almost looks oily. But, the good news is that he's healthy, we can lose the Failure to Thrive diagnosis and everybody's happy.

And here's my little bubs: 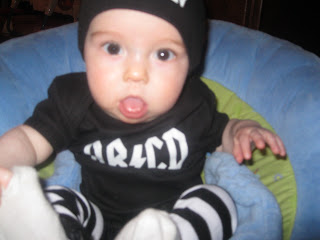 Wyatt is about 10 1/2 months old and barely doubling his birth weight, why? he was 11 lbs at birth and I had/have supply issues. Glad you were able to work it out for yourself and do what you feel is best. I trust my motherly instinct more than anything now.

I had a couple of babies that didn't gain very well till they were weaned at 1 year. I used a method of breastfeeding that I wouldn't recommend -nursing on one side as long as they want, and then offering the other side. This is instead of letting them nurse for about twenty minutes on one side and then switching to the other side for a full feeding. After they started on full-fat cow's milk they plumped right up and were fine. Your baby will be fine, too. but the work and the expense - ugh! Frustrating!

I'd think nursing & supplementing would be sufficient!

oh man I feel for you. I have not heard of this oil but am looking it up. I use to take a jar of babyfood and add vegetable oil and carnation instant breakfast and sugar too it. I still can not believe how much I put into my baby girl

Hello,
I am glad you figure out what worked best for you guys. I am now following you..please stop by and say hi Areyouamom.com
Thanks,
Maureen