Not much going on around here other than the same old stuff:

*Isaiah is still working on his teeth, although last night was back to his usual sleep pattern: asleep at 9:30, awake at 11:30 to eat, sleep until 5:00, awake again to eat and then spend the rest of the morning in bed with us. So we're pretty excited about how much sleep we got last night

* Still hate the charting tickets that are being handed out. Seeing tickets on your locker for asinine omissions just sets the tone and attitude for the rest of the shift. One found on my locker Saturday night was that I didn't fill out the first-dose education on colace. A stool softener. How petty can we get. And how much education do you really need on a stool softener?!

*Work was S-L-O-W this weekend. We have a couple orientees, which means when I'm not in charge, I have to sit back and let them do things, which is so hard to sit back and not "do". Sunday night, we only had 4 moms/baby dyads and 1 outpatients in L&D. I was in charge and had no patients for 12 hours. Very long night. Only spot of action was the labor patient G5 P3 that delivered after only 2 hours of labor. She woke up, felt a gush and thought her water broke, but it was just blood. After arriving at L&D, the girl orienting wanted me to check our her bleeding. There was a pretty good amount of blood, about the size of a large platter under her. Baby looked great, so we put a new pad under her to monitor a bit more. Five minutes later, another spot the size of a dinner plate. No history of a previa, but did deliver quickly with her last baby. So we called the doc, checked her cervix and she was 8 cm. After a nice quick delivery, the doc thought that maybe she did have a small placental abruption and that's part of the reason she went so quickly. After that, it was slow again, so I decided to read a book left by a patient a couple weeks ago called "The Shack" and managed to finish it. I didn't think it be very good, but I would whole-heartily recommend it. It's about a guy whose daughter goes missing and they find evidence she was murdered but never find her body. 4 years later, he gets a note that he thinks is from God, telling him to go back to this shack. It sound corny, but it's really very good.

*Our current Nurse manager announced she is leaving the department to head up the committee overseeing the new building construction. Mood in the department has changed.
;)

* After, oh, a week of rain we finally have sun today. Yeah! And after hearing about several people with standing water in their basements, we were glad to only have just a little seeping around one corner in our basement. Of all the things that need work in this house, it's nice to know the foundation is solid.

*Clara turns 4 tomorrow. We are taking her to a kids equivalent of a keg party: Chuck E Cheese. We're not having a huge party where we invited a bunch of her friends from daycare, but some family is coming and she'll have a good time. Its hard to believe she's 4. 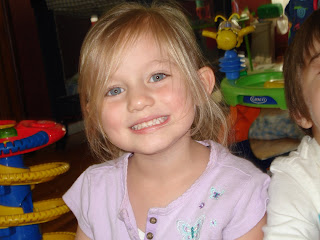 I completely understand about the overbearing boss who wants to micromanage. While annoying, I have just been sitting back and laughing while he makes a fool of himself.